In my most recent post, I describe my current understanding of quantum mechanics, which makes use of a couple of ideas that I derived independently such as the notion of information about events being manifested in the correlations between entangled objects.  I also discuss how correlating facts between systems must be transitive, so that facts relating systems A and B, along with facts relating systems B and C, would relate systems A and C.  This notion logically implies the “relativity of quantum superpositions,” which I also derived separately from an exciting insight described in this post.

Well, as it turns out, I am almost certainly correct, and the reason I hadn’t previously learned about it (or been taught about it) is that it is apparently cutting edge.  Here are three articles (here, here, and here), the earliest of which was published in 2017, that are among the first to describe quantum superpositions as relative to each other, so that neither is a preferred reference frame.  (This contrasts with other “relational” concepts, including Rovelli’s Relational Interpretation.)  In fact, Fig. 3 from “Quantum Mechanics and the Covariance of Physical Laws in Quantum Reference Frames,” published in Nature, is so fantastically clear that it’s worth reprinting here: 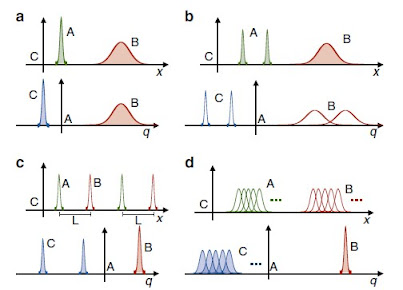 This excites me because:

·         It underscores that I am going down the right path despite being generally ignored and/or discouraged.

·         I am clearly learning and understanding the foundations of physics almost entirely through independent analysis, logic, and reason.

·         Not only have I independently figured out features of the physical world that lots of other physicists don’t know, I may actually be at or near the state-of-the-art, which means it’s just a matter of time before I contribute new concepts to the field (if I haven’t already here, here, here, and here).

However, this also scares me because in May I had a long and very encouraging phone conversation with Igor Pikovsky, who has worked closely with several of the authors of the above papers (particularly Caslav Brukner), regarding the effects of gravitational decoherence on Schrodinger’s Cat.  He invited me to join his discussion group when he returned to his faculty post at Stevens Institute of Technology, not far from where I will be studying at NYU.  However, I’ve attempted to follow up with him several times; either my emails have hit his spam box or he has ghosted me.  Sadly, I think the latter is much more likely.  Further, I emailed Brukner himself in June and received a very dismissive email.

I think that at many times in human history, people have been genuinely curious about the world and interested in collaborating for the purpose of deeper understanding.  This might surprise you, but Einstein’s “miracle year,” in which he published several groundbreaking papers (including Special Relativity and the photoelectric effect, on which he eventually won the Nobel Prize), happened at a time in history (1905) in which there was so little competition for prizes or publications that he was able to get these papers published with essentially zero peer review.  (Can you even imagine the arrogance of a referee who would claim to be Einstein’s intellectual “peer”?!)  In other words, he and other scientists published research more-or-less for the love of knowledge and the hope of collaboration and scientific advancement, not accolades.  In sharp contrast, today all that matters in the academy is publish-, win-grants-, and get-tenure-or-perish.  No matter what I do, I am constantly (and involuntarily) in competition with thousands of physicists who don’t give two shits about knowledge or understanding but do give several shits about getting another notch on their publication belt.  (If you are yet another physicist who doesn’t understand logic and thus took offense to the last statement, I did not say that no physicists care about knowledge or understanding, but rather that I am competing against a massive population who don’t.)

This is a very long way of saying that while I sincerely hope that neither Brukner nor Pikovsky intended to exclude me because I might be trespassing on their turf of potential grants, publications, maybe even (in their minds) a Nobel Prize... it would not surprise me if they did.  I will reach out to them again in the next week.  I really hope that they (and others) will recognize that I am genuinely interested in learning and collaborating so we can, as a human species, figure out the nature of the physical world.  Nevertheless, I won’t be surprised if I have to proceed, as I have for over two years now, almost entirely on my own.  But if I have to, I will.  It took me only two years to independently understand quantum mechanics at the cutting edge.  It is just a matter of time, if I haven’t already, before I learn and explain facts about physics and consciousness that no one else has.

To those who would ignore, dismiss, discourage, or patronize me: You can collaborate with me or not.  Collaboration will accelerate our progress.  But if you don’t – perhaps because you are being a petty, recognition-obsessed turd – I will still beat you in the long run.  Do not underestimate the power of an intelligent, curious, innovative, hardworking, highly educated, financially independent maverick.

I will figure out the nature of the physical world.  Join me or don’t.

All comments are moderated. After submitting your comment, please give me 24 hours to approve. Thanks!

Andrew F. Knight, J.D.
Andrew Knight has degrees in nuclear engineering from MIT and the University of Florida as well as a law degree from Georgetown University. He is the sole inventor on 17 U.S. patents on technologies including rocket propulsion and information compression. After starting several small businesses, he retired at age 41 to pursue, full-time, fundamental understandings of physics and consciousness. Click here for full bio. Click here for Curriculum Vitae.

Why Mind Uploading and Brain Copying Violate the Physics of Consciousness

I just finished creating a video, now posted on YouTube, that attempts to prove why the laws of physics, particularly Special Relativity an...