“Interaction-Free Measurements” in Quantum Mechanics are Not Surprising

Let’s say I write a paper logically showing why the fragments of a detonating nuclear bomb cannot exceed the speed of light.  Would that be interesting?  Perhaps the nuclear bomb aspect might make the paper a little sexier, but clearly the paper wouldn’t add anything new to our understanding of special relativity (SR).  Nobody who understood SR would be surprised by the paper.  In the unlikely event that I managed to get the paper published, nobody would cite it, right?  And anyone who did cite it as a “surprising” result clearly doesn’t understand SR.  Right?  Having said that...

Quantum mechanics is all about one thing: negative probabilities.  Everything about it, particularly why it’s weird, can be summarized in the following very simple point about double-slit interference experiments.  It was found, empirically, that when we send a certain kind of stuff (“particles,” such as photons or electrons) through a very narrow slit in a plate, and we detect them on a screen that is parallel to and far away from the plate (called the far-field approximation), we find that individual particles are detected, and if we detect enough of them, their distribution forms what is called the Fraunhofer diffraction approximation: 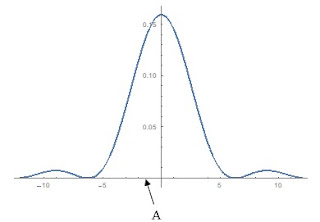 (Please ignore the axis units.)  In the above example, the probability of detecting a particle at, for example, location A is relatively high.  It was also found, empirically, that if we redo the experiment using two closely-spaced narrow slits (say, a left slit and a right slit), we find that the detected particles form what is called an interference pattern: 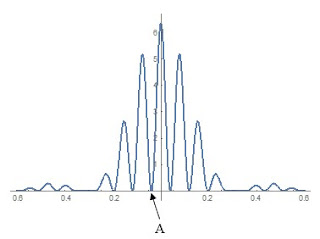 That’s right.  If only one slit had been open, the probability of detecting a particle at this point would have been nonzero.  So how is it that by adding another slit – by adding another possible path through which a particle could reach location A – we decrease its likelihood to reach location A?  The answer, mathematically, is that by adding probability amplitudes of waves prior to taking their magnitude, terms that are out of phase can cancel each other, resulting in a negative probability.  The answer, conceptually, is that the “particle” isn’t really a particle until it is actually detected.  It is only by assuming that there is a particle that traversed either the left slit or the right slit that we run into trouble.

And that’s it.  That’s the very essence of quantum mechanics.

Now, let’s say that you’re about to do a double-slit interference experiment on electrons.  Just before you start, you have to use the bathroom so you put your lab partner in charge.  When you return, your lab partner says, “I was messing around with the double-slit plate and a foreign object – maybe a speck of dust – might have gotten stuck in the right slit.  But the left slit is fine.”  You go ahead with the experiment and send a single electron through, which you happen to detect at location A.  What does this tell you?

There is absolutely nothing interesting or surprising about the above point.  In other words, once you’ve accepted that quantum mechanics allows negative probabilities, then of course you can set up a quantum mechanical interference experiment in which the detection of a particle in a particular place (or by a particular detector) renders information about the presence or absence of another object that obviously did not absorb or scatter that particle.

In 1993, a famous paper was published in which the above example was characterized as an “interaction-free measurement.”  (The Wikipedia entry on it is terribly written but at least gives the general idea.)  It described what came to be known as the Elitzur-Vaidman bomb tester, in which a bomb would go off if its sensor absorbs a single photon, but defective sensors (of defective bombs) would allow photons to pass through unaffected.  The general idea is nothing more than what I described above – you can set up the experiment so that detection of a photon in a particular place (such as location A) tells you that the sensor/bomb is operational even though the sensor did not absorb the photon.

The whole “bomb detection” notion was just a way to make the paper a little bit sexier but didn’t add anything to our understanding of quantum mechanics.  To be fair, the paper wasn’t completely useless... it did explain how to increase the efficiency of detection to 50%.  (A paper published in 1995 showed how to push the efficiency much higher.)  In my example above, the likelihood of detecting an electron at location A is of course very low, yielding a very low efficiency, but the fact that it is nonzero is what clearly demonstrates that an object can be “measured” in the right slit without it absorbing or scattering the electron.

And there is nothing interesting or surprising about that fact over and above the fact that quantum mechanics allows negative probabilities.

So why did I write this post about a 1993 paper whose conclusion should have been obvious to anyone who understood quantum mechanics?  Because it has been cited over 800 times by publications, many of which continue to characterize “interaction-free measurement” as some kind of inexplicable paradox within quantum mechanics.  What might that tell us about the credibility of those papers or their authors as experts on quantum mechanics?

Part of the confusion is the incorrect notion that an “interaction” only occurs if the object being detected (bomb sensor, speck of dust, etc.) actually absorbs or scatters a particle.  Quantum mechanical waves are constantly interacting with other objects.  In the double-slit interference experiment above, the waves emanating from only the left slit (when the right slit is clogged with a dust speck) are different from waves that would emanate from both the left and right slits, which is why the screen detection distributions differ.  Therefore, the electron wave did interact with the speck of dust in the right slit even if the entirety of the electron wave ultimately collapses onto the screen and not the speck of dust.  In other words, to say that the electron didn’t interact with the right slit presupposes that the electron is a particle, but it does not assume a particle form until it is detected!  The entire misnomer of “interaction-free measurement” assumes that only “particles” can interact, but photons and electrons do not take on particle-like qualities until they are measured!  (Specifically, the particle- and wave-like characteristics of an object are complementary.)

Some of this confusion is clarified by Vaidman himself (such as here) and by other papers (such as this).  I am not criticizing the discussion.  I am simply pointing out that “interaction-free measurements” should never have been surprising in the first place.

All comments are moderated. After submitting your comment, please give me 24 hours to approve. Thanks!

Andrew F. Knight, J.D.
Andrew Knight has degrees in nuclear engineering from MIT and the University of Florida as well as a law degree from Georgetown University. He is the sole inventor on 17 U.S. patents on technologies including rocket propulsion and information compression. After starting several small businesses, he retired at age 41 to pursue, full-time, fundamental understandings of physics and consciousness. Click here for full bio. Click here for Curriculum Vitae.

Why Mind Uploading and Brain Copying Violate the Physics of Consciousness

I just finished creating a video, now posted on YouTube, that attempts to prove why the laws of physics, particularly Special Relativity an...